“The case of the Frightened Lady”
departing from Nailsworth Bus Station at 12.30pm
Cost £50

* Payment is required by 1st June *

When Inspector Tanner is called in to investigate a ruthless murder at Mark’s Priory, the grand ancestral home of the Lebanon family, he quickly discovers that nothing is quite as it seems. The household is controlled by the family physician, the footmen behave more like guests than servants and the secretary Isla is afraid for her life. As Tanner moves closer to the heart of the mystery he uncovers a shocking and closely guarded secret…

Edgar Wallace’s gripping page-turners are regarded as the bedrock of the modern thriller and The Case of the Frightened Lady remains one of his most celebrated works.

The internationally acclaimed stage sensation, JERSEY BOYS is heading back out on its second national tour! This smash hit musical has won 57 major awards worldwide, including the OLIVIER AWARD for BEST NEW MUSICAL.

Jersey Boys tells the true life story of four boys from the wrong side of the tracks who wrote their own songs, invented their own unique sound, and sold 100 million records worldwide. Featuring hit after legendary hit including BEGGIN’, CAN’T TAKE MY EYES OFF YOU, OH WHAT A NIGHT, SHERRY, WALK LIKE A MAN, BYE BYE BABY, BIG GIRLS DON’T CRY and many more, JERSEY BOYS is a story full of heart, humour and ‘sheer musical razzmatazz’  you simply will never forget.

For anyone who has not seen this show I highly recommend it. As a lover of classical musical who has never liked “pop” I was dragged along to see this show which to my amazement I loved.

* Payment is required by 20th April *

Take a fantastic musical adventure with an out-of-this-world car in this family-friendly blockbuster that audiences will find Truly Scrumptious.

An eccentric inventor, Caractacus Potts sets about restoring an old race car from a scrap heap with the help of his children, Jeremy and Jemima. They soon discover the car has magical properties, but trouble occurs when the evil Baron Bomburst desires the magic car for himself. The family joins forces with Truly Scrumptious and batty Grandpa Potts to outwit the dastardly Baron and Baroness and their villainous henchman, the Child Catcher.

Filled with amazing stage spectacle Chitty Chitty Bang Bang is a high-flying, fun-filled adventure for the entire family. BLOC Productions traditionally large and award-winning cast, together with a full-scale orchestra, are delighted to be taking on the theatrical challenge of creating true stage magic on the famous Hippodrome stage which has been their home for over 60 years.

When a Government Junior Minister plans to spend the evening with one of the Opposition’s typists in the Westminster Hotel, things go disastrously wrong – beginning with the discovery of a body trapped in the hotel’s only unreliable sash window. Desperately trying to get out of an extremely sticky situation, things quickly go from bad to worse.

Recognised as ‘the master of farce’ (The Telegraph), Ray Cooney’s credits also include Run For Your Wife, Funny Money and Move Over Mrs Markham.

Winner of the 2016 Olivier Award for Best New Comedy, Jessica Swale’s blissfully funny Nell Gywnn embarks on its first ever UK tour, direct from critically acclaimed, sell out runs in the West End and at the Globe Theatre.

1660 Drury Lane. Charles II has cast off London’s drab, puritanical past with a love of all things loud, French and sexy. A young Nell Gwynn is selling oranges for sixpence in London’s burgeoning West End theatre scene. Little does she know who is in the audience one fateful night.

Jessica Swale’s warm hearted, bawdy comedy tells the story of an unlikely heroine, who went from lowly orange seller to win the adoration of the public and the heart of the King. Starring Oliver Award nominated actress Laura Pitt Pulford, Nell Gwynn is brought to the stage by English Touring Theatre. 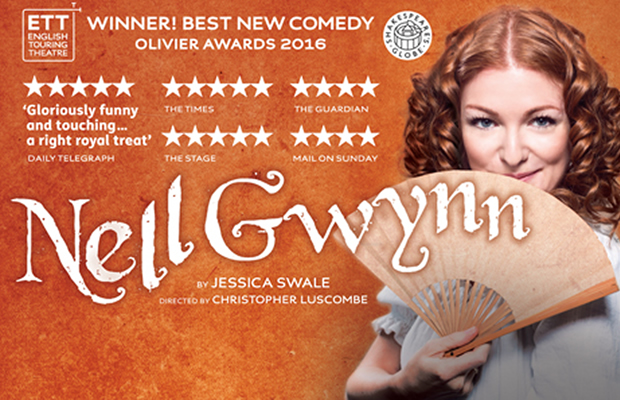